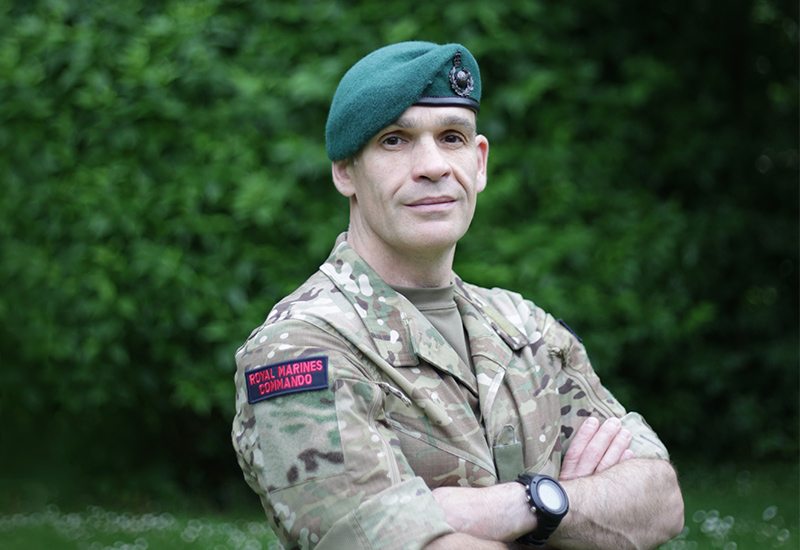 When I met Kian Murphy at the celebration of the Queen’s platinum jubilee at the Ambassador’s residence in Lisbon, he cut an impressive figure in his ceremonial uniform. As the UK Defence Attaché to Portugal, only part of his role is ceremonial. An increasing amount of his work is both fascinating and, due to world events, vitally important.

Lieutenant Colonel Kian Murphy was commissioned into the Royal Marines (RM) in 1996. Following Commando Training, he served in 45 Commando RM as Troop Commander and Company Second in Command, during which time he deployed to Norway, Belize, Brunei, the Mediterranean and conducted humanitarian operations in South America. As an honours graduate of Fine Art, however, he has a more intellectual air than military.

It is not surprising, therefore, that it was his studies of military affairs that helped him achieve the highly coveted role he is currently enjoying in Lisbon.

Early in his career, he developed an interest in foreign affairs and joined the defence engagement career stream for the British armed forces. Promoted to Major in 2005, he served his initial staff appointment managing the Royal Marines Reserve in Navy Command HQ. He went on to command R Squadron at 43 Commando RM, conducting nuclear security operations. He completed his first overseas appointment as Staff Officer Plans and Policy at STRIKFORNATO in Naples. During the Libya crisis in 2011, he was deployed as Military Attaché to the Deputy Commander of NATO’s Operation UNIFIED PROTECTOR.

After spending a year back in the UK as an instructor at the Army Staff College, he followed in the footsteps of Napoleon and attended Advanced Command and Staff College at the French War College in Paris. It was there that he acquired a good grasp of the language and a taste for serving abroad.

Following his academic studies, he was promoted to Lieutenant Colonel and remained in France as an Operations officer. In 2014, he deployed with the French forces to the Central African Republic as the Chief of Operations for the European Union operation to secure the capital Bangui, for which he was awarded the Queen’s Commendation for Valuable Service. During this busy period, he also studied for a Master’s Degree in Leadership and Management. Most recently, he served in the Navy Command HQ as the officer responsible for Strategy and Policy, developing coherency in the long-term programme.

However, he still cites the highlight of his career as commanding Marines on deployment in Iraq in 2004, operating in Basra and Baghdad as “that is what we train to do.”

After a highly competitive entry process, he became a defence attaché in 2021. Linked to the British embassy, his role is different to the military attaché, which represents just the army. As it is a small mission, his job is to be the UK Chief of Defence Staff representative in Portugal for all the armed forces. Day-to-day he manages the strategic relationships between the two countries, acting as the MOD’s forefront liaison between Portuguese military defence and armed forces. He is also the non-resident defence attaché for Cape Verde.

Lieutenant Colonel Murphy works with heads of the Portuguese services, such as Admiral Silva Ribeiro, head of the armed forces in Portugal, and his staff. His main points of contact are the Portuguese Ministry of Defence body called the DGPDN (Direção-Geral de Política de Defesa Nacional) which deals with international engagement.

To implement his strategy, he works closely with the office of the minister of defence. Helena Carreiras took office as Portugal’s Minister of National Defence in Prime Minister António Costa’s newly formed government in 2021. She is the first woman to ever hold the position.

The Portuguese armed forces’ role is national defence and security and policing their responsibilities worldwide. Relatively small, they have a strength of around 30,000, split between the three forces. Currently, the Portuguese armed forces include 32,992 military personnel, of which 12% are women. Kian tells me, “For a small force, they have a large area of responsibility with a huge Atlantic domain to the Azores and Madeira as well as being involved in NATO, EU missions, so they punch above their weight.” One of the Portuguese army’s largest current roles is in support of their former colonies of Mozambique as they lead the EU mission against Islamic insurgents.

Military service in Portugal was phased out at the end of the 90s and the army is now entirely professional but still has an annual requirement for every Portuguese citizen aged 18 to attend a training day, Dia de Defensa Nacional, to understand the role of national defence.

Kian tells me that Brexit didn’t affect the military relationship much as the two countries have such strong bi-lateral agreements. To illustrate this, on 10 July 2022, Portugal and the UK marked the 650th anniversary of the Treaty of Tagilde. This was one of the principal treaties leading to the formation of the Anglo-Portuguese alliance. It was signed within the context of the hundred years war, which, despite being a conflict between England and France, embroiled most of the rulers of Europe. The treaty was concluded in the Church of São Salvador in Tagilde between King Ferdinand I of Portugal and John of Gaunt, the Duke of Lancaster (third son of Edward III). It was an attempt by both to enforce their claims on Castile after King Peter killed his half-brother Henry Trastámara to claim the throne. The treaty established the two countries as true friends and military allies. It is the oldest alliance in the world still in force.

Kian attended the commemorations in his ceremonial role, which included a re-enactment of the signing of the treaty in the otherwise unknown village of Tagilde. In nearby Braga and Vizela, the Choir of the Queen’s College, Oxford, and the Coldstream Guards Brass Quintet and Royal Ballet performed to mark the anniversary.

In a demonstration that world politics have not changed that much, six and a half centuries later, in June 2022, Prime Minister Boris Johnson and Portuguese Prime Minister António Costa signed a joint declaration. This bi-lateral agreement attempted to re-enforce this old alliance despite the UK locking horns with Brussels over post-Brexit differences. Costa said Portugal “cannot waste” the old Luso-British alliance. This declaration includes military exchanges, developing capabilities across both nations and defence.

The defence attaché’s key output is now working towards the goal of signing a new defence agreement, which will bring the old allies even closer in a military relationship. Hoping to sign that in the next 12 months, he coordinates the defence agreement at the more political level, right down to the tactical movement of resources and the exchange of personnel.

Another important aspect of his role is coordinating training between the two countries. Kian has previous experience; in 2016, he worked on STRIKFORNATO, as Deputy ACOS of the Training and Exercise branch, where he was responsible for training the 3* NATO Maritime Expanded Task Force as a hybrid staff spanning the higher tactical and operational levels of command. This HQ is also located in Lisbon.

In his attaché role, he has coordinated training with fast jets, two helicopter squadrons and facilitated the training of Portuguese search and rescue pilots. He also organises the training of the Portuguese navy as every ship goes to the UK to prepare for operations at Devonport. The FOST programme (Fleet Operational Sea Training) conducts training for UK and NATO troops, including Portuguese, and has established and maintains a worldwide reputation for excellence. He also covers the logistics of the large contingent of British forces coming to Portugal for training or sports exchanges.

A big exercise led by the Portuguese navy is REPMUS. The UK sends a large military and civilian contingent to this exercise every year to experiment with unmanned surface, air and sub-surface systems. “Tying in new technologies into NATO operations is the key to future warfare.”

Does Kian regard Putin as a threat to peace in Europe? “The Kremlin’s unprovoked aggression and the attempt to redraw the map of Europe in blood, is an attack on Europe,” Kian says with passion.

“We are united in supporting Ukraine by providing humanitarian and defence aid, working alongside sanctions. We need now to prepare for a long mission as Putin resorts to a war of attrition. We have got to respond to that and ensure that Ukraine will prevail and win. The wider threat to EU peace we deal with through NATO, which, as founding members, is the cornerstone of Portuguese and UK defence and at the forefront of our response. We have sent forces to support allies on the Eastern flank and worked alongside other allies on the new NATO strategic concept as the new way of responding and addressing these threats.”

Kian cites one of the most successful projects that the UK and Portugal have worked closely on this year, is to support the military donations to Ukraine, ensuring that Ukraine has the tools it needs to defend its country. The UK is leading the way with 2.3 billion pounds of military aid– more than any country apart from the US. Portugal has also been forward-leading in military and humanitarian support.

I ask Kian how the military is now having to evolve to reflect the changing politics and world events. “Investment in the armed forces is increasing in the UK and Portugal. War in Ukraine has shown how important technology is, so we have seen new investments in high-end military capability. Portugal has already commissioned a new multi-purpose vessel with crewless vehicles. Unmanned systems will be a part of the future battlefield and we need to be operating in that space.”

With all of these responsibilities on his desk, has Kian had time to enjoy living in Portugal? Married to Tanya, they have two boys, Attie (15) and Teaghan (12). “Working abroad with my family has been a highlight of my later career. Relocating to another country and becoming absorbed in the culture gives us a real adventure. After living in France, where my children learnt French, they are now enjoying life in Lisbon and learning Portuguese. Portugal is shaping up to be one of my best postings. What is there not to like here? The weather, the people, the wine! The coastline is stunning, but then the mountains in Jerez are beautiful. Portugal really offers everything.”

If you think this marine could not possibly fit more into his life, then think again! He is a keen triathlete who also enjoys mountaineering and making modern art in his spare time. He modestly confessed that he is just trying not to get injured so he can compete in another triathlon, so has been enjoying the more sedate sport of getting on a SUP board in the ocean.

Being the UK attaché is a three-year role, but he has the potential to extend to four depending on military defence strategy. He would love a further promotion after this job to take on another defence attaché role where he could use his new Portuguese or French language skills, but his overall goal is to return to Portugal to retire.

In a fascinating discussion with the Defence Attaché, I have learnt that the ancient friendship between England and Portugal is perpetuated in their military roles. Far from just being a historical relationship, it is constantly evolving to embrace the new world, whether in war or peace. 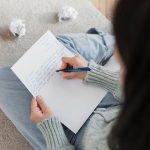 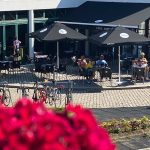 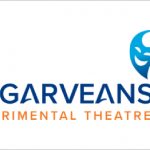 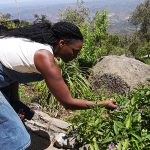 From the Ground to the Gut 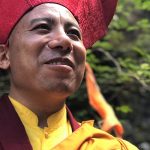 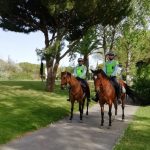 Bring on the Cavalry