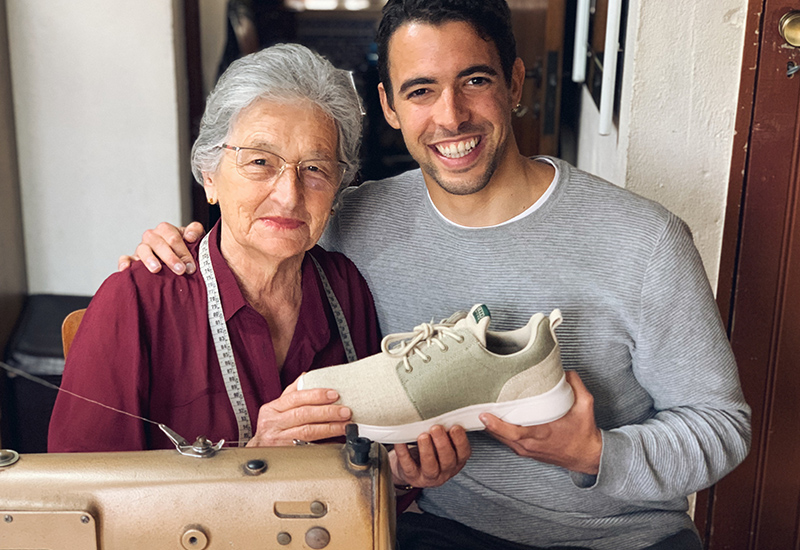 What is 10,000 years old, incredibly strong, environmentally sustainable, can replenish the soil and reduce Co2 – but is much maligned and misunderstood? I’m talking about hemp. Now a Portuguese businessman is seeking to turn hemp into the good guy. All with the help of his Gran!

This is the kind of story you could see being made into a Netflix series, so it’s not surprising it was picked up by the biggest Portuguese news channel and went viral. I was fortunate enough to secure an interview with the CEO and founder of 8000kicks, Bernardo Duque Carreira, to find out more.

Bernardo speaks fluent English, having studied at Purdue University in Indiana before working in London as a PR manager for start-up telecoms. “I love the work culture in London. I miss it a lot.” However, he had a dream to start his own company and decided in 2017 that he needed some time out from city life.

He returned to his hometown near Fátima for the summer to hang out with friends and spend time with his family. After a few beers and joints with the lads, they were having one of those 5 am chats about nonsense when someone proposed the idea of creating a shoe that could be smoked. It was one of those discussions that generally gets left behind in a fuzz of intoxication, but Bernardo remembered he had seen wallets made from hemp. He got to wondering if you could make shoes out of it.

He turned to a very unlikely source to develop his idea – his Gran Otília, who had 50 years of experience working in textiles. “She is 76, so obviously was not happy with the idea. I explained to her that hemp is a fabric and not a drug. After she saw the fabric, she became interested.”

Bernardo started buying hemp from around the world, including Canada, the US, and Romania. He bought it from every supplier he could find, having it delivered to his grandmother’s house, where they did experiments, analysing the fabric. Bernardo employed a designer to create a shoe design. Next, they started working with factories until they found a good partner in the north of Portugal and started making products.

This process was nothing new for Otília. She started working with textiles after her father bought her a sewing machine as she couldn’t afford to buy dresses. During the dictatorship, life was so tough in Portugal that when she was a child, she and her siblings would collect leaves to make soup. When she was 18, she walked for two days to reach an industrial town where she later got work in a stitching factory. She continued to make her own clothes and for friends who admired her creations. Years later, she was promoted and worked from home. Bernardo recalls, “Factories would deliver her work. I remember an old man coming with sacks of clothing patterns and she would spend days assembling them with two other women in her house.”

Bernardo uses the industrial variety of the Cannabis plant for his shoes, not the flowers or the leaves – it is not a drug. This variety is optimised to grow in height and fibres are extracted from the trunks; the bigger it is, the stronger it is. “The greatest thing about hemp is it can grow up to 4m tall,” Bernardo tells me. Cotton has very short fibres as it comes from a smaller bulb. So hemp gives you long fibres, which will last longer. It is the strongest natural fibre available.”

With the help of his grandmother, Bernardo manipulated the hemp to make it stronger. He didn’t apply for start-up grants as he knew the process would be slow. “I decided to go the American way and just go for it! I did a crowdfunding campaign to launch the business from samples and created a page on Kickstarter, so people bought the shoes before we produced them.” From this, he raised 250,000€ to start the business. He is only now applying for grants to expand.

Although Bernardo is to be congratulated on his ingenuity, hemp is not a new concept. It is 10,000 years old. In fact, you could say that Bernardo is quite literally reinventing the wheel. “We are returning to how our ancestors worked with hemp, which has led to our good quality products. In my region, hemp was a big industry before cotton. Portuguese and British ship sails and ropes were made from hemp. All their clothing would have been made with hemp. A big museum of hemp near Tomar bears evidence of this. You can see all the old machines.”

Bernardo’s key to success is going back in time and attempting to recreate the past, but with modern machines. He is also working with other producers to improve the quality of the fabric. He and Otília visit factories together and while he is the business brains, he gives his grandmother total credit for being his quality control.

“When we were starting out, we had problems with glue at a factory. My grandmother was analysing the shoe and was unhappy with the quality and she saw that the factory was cheating me. I did not have the technical jargon to confront the manager, so my grandmother stormed past the reception, went all the way up the stairs to the head manager‘s office and made him come down to the factory floor with her to explain why the glue was not good. She was lecturing him on how to make shoes. The entire factory stopped and was watching. She didn’t care. She just goes for it.”

While Bernardo and Otília are just discovering hemp, it is known that man has used hemp since 8000 years BC. This, indeed, is why Bernardo named his company 8000kicks. Bernardo sources most of his hemp from China, which is the number one producer in the world. Despite never legalising cannabis, they never banned hemp.

In comparison, hemp production was banned throughout the United States in 1937 with the passing of the Marijuana Tax Act. Ironically, during World War II, it was lifted briefly to allow for hemp fibre production to create ropes for the U.S. Hemp for Victory campaign. A black-and-white United States government film made during World War II and released in 1942 explains the uses of hemp and encourages farmers to grow as much as possible. But after the war, hemp reverted to its de facto illegal status. In the early 1970s, Nixon formed the National Commission on Marijuana and Drug Abuse, which finished hemp for another 50 years. Ironic considering the American Constitution is written on hemp! If you were a cynic, you might also reflect that lobbying from the cotton industry could also have played a role.

In 2014, President Obama signed a version of the Farm Bill that established the Hemp Pilot Program, allowing research institutions to cultivate and study hemp. And in 2018, hemp was officially legalised. Banned in Portugal from 1974, the cultivation of hemp for industrial purposes is now lawful, and almost totally deregulated in this country, needing only a permit. This is good news for Bernardo and the planet.

Cotton is one of the biggest pollution sources in the world, requiring a lot of water, fertiliser, and pesticides, while it also produces Co² emissions. In contrast, hemp is a weed and doesn’t require much water. It actually cleans the soil of pollutants and for almost two decades, industrial hemp was grown in the environs of the abandoned Chornobyl nuclear power plant to help reduce soil toxicity. It is also used in crop rotation to rest the soil. It seems like a no-brainer that we should be turning to this miracle plant.

The only disadvantage is that it is more costly to turn into the fibre, making it more expensive. Although this also has its benefits. Bernardo uses factories in China, Portugal and Romania, but sends his agents to ensure good working conditions and that everything is under control. “We don’t work with cheap factories; they can’t cut corners with hemp. So only good factories want to work with us.”

I question Bernardo as to why we would use hemp in shoes. It turns out that the properties of hemp make them perfect for footwear. Hemp has antibacterial properties, thus reducing foot odour. It is also temperature regulating, durable, waterproof and fireproof, which is why people are now using ‘hempcrete,’ building blocks made from hemp.

As the business grew, Bernardo travelled to the US and Asia and then the North of Portugal to explore new production sites. Eventually, he settled on opening his first warehouse in Fatima as it’s cheaper. From here, they distribute all over Europe. They suffered a major setback during COVID. But not to be kept down, the duo turned their attention to making masks, initially producing 6000 in hemp, with Bernardo cutting the fabric for his grandmother to sew. Once demand grew, the duo made over 6000 more.

“I think it is so important to include the older generation in my business ventures. They have so much wisdom, so it benefits me but also makes my grandmother feel valued. She often will come to the office and does quality inspections. Once she saw someone had posted on Facebook that the sizes were too small so she came to the factory to measure them to ensure I was getting it right!”

As well as their online store, the shoes are being stocked in Sapato Verde and Xairel in Lisbon. The dream is to have an 8000kicks store, and they are currently in negotiations for a commercial space in the capital.

They are not stopping with shoes. Their latest range of hemp backpacks claim to be the world’s first waterproof variety, meaning you can hemp yourself from head to toe!

The main market for Bernardo is in the US. Before Brexit, the UK placed the most orders and it is still the second biggest market, followed by Germany. With online purchases, shipping and returns are free. So if they are not the right size, they send a delivery company to pick them up from your house. Everyone Bernardo employs (three besides himself and Otília) speaks English. The shoes retail at 130€.

Otília and Bernardo have kickstarted an enduring business relationship and a successful enterprise that draws on the wisdom of the past. So, before you start off on the wrong foot, make big footprints by wearing shoes from the hemp plant that leave a small footprint on the planet!

The cultivation of hemp began more than 10,000 years ago in the region that is modern-day Taiwan as one of the world’s first agricultural crops. The earliest known fabric made from hemp was woven somewhere between 8,000 and 7,000 B.C.E., found in present-day Iraq.

Marijuana and hemp are varieties of cannabis that developed due to selective breeding: Hemp for its fibre and marijuana for its narcotic components. While the two look and smell alike, they are chemically and structurally different. 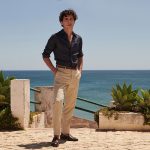 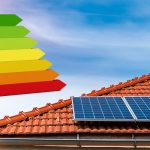 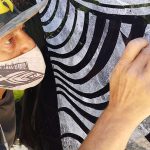 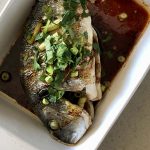 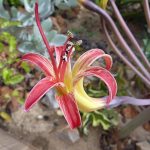 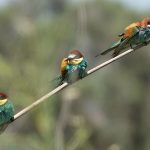 A Winged Splash of Colours